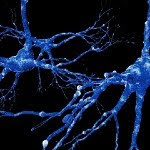 This is your brain after a stroke.

There are over 100 billion nerve cells in the human brain. A typical stroke kills only 2 billion of them.

That's where neuroplasticity comes in. Neuroplasticity is the ability of our brain neurons to take on -- or change -- their functions. Neuroplasticity occurs during normal brain development when the immature brain first begins to form. But it also occurs all the time (think, learning) and plays a major part after a stroke, as the brain tries to compensate for lost function or to maximize remaining functions.

We use 100% of our brains, but which the neurons are used for which functions can change. This is why stoke survivors can get back functionality, like walking. The brain can simply re-route and re-use old neurons to new uses.

Some books about neuroplasticity:

A simple animation about neuroplasticity:

For a more in-depth discussion, you can view this Ted talk by neuroscientist Michael Merzenich: