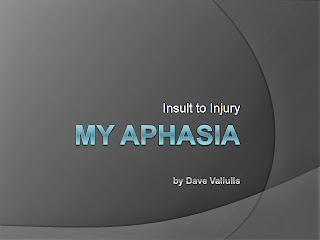 Six years ago I had a stroke that left me literally speechless. I was diagnosed with having expressive aphasia, also known as Broca's aphasia. My aphasia took away 2 years from me. I need not go into the many types of aphasia or the main aspects of my aphasia; those you can get from a text-book. 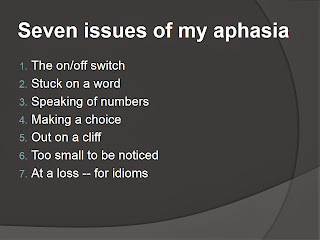 But I do want to talk about the following 7 points of my aphasia that were especially hard on me. 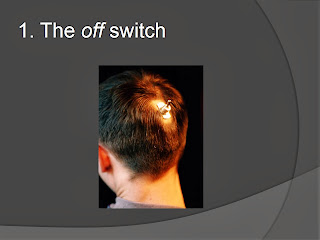 Like so many strokes, my stroke had no warning. It came on during the early morning and progressed quickly. By the time I had alerted my husband that something was wrong, I had lost the power of speech. But the worst thing about aphasia for me was not “being unable to speak” but being unable to speak all of a sudden. Aphasia is like an on/off switch. I went to sleep 6 years ago knowing I could talk and walk, but the next morning I couldn't say a single word or get out of bed. This sudden loss of speech was for me far worse than not being able to walk. What was so quickly taken away from me became a torturous job of small steps to regain my speech. 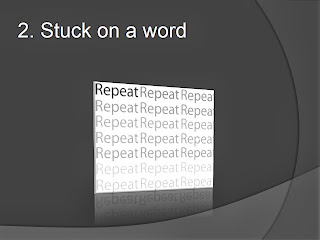 One of the ironies of aphasia is in addition of not being able to say the word you want, is being able to say a word you don’t want over and over again. This is called perseveration. You have no idea how frustrating it is when a word comes out unbidden again and again from your mouth when you’re trying to say something else. In extreme cases, a person can only say one or two words over and over again. Several people in my stroke group have had perseveration like this and my heart goes out to them. 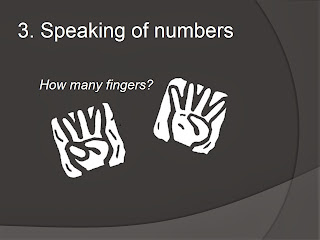 People who have aphasia problems also often have problems with another form of language – the language of numbers. Even now, I have trouble working with and remembering numbers – even my phone number and my address – and I’m hopeless at figuring out a tip at a restaurant. More embarrassing, when I held up my fingers to show a number, I used to get it wrong until I looked at them. 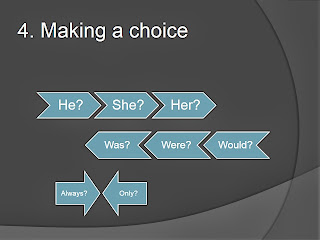 It’s well known that people with aphasia often say yes when they mean no, and the other way around. This yes/no confusion usually resolves itself quickly, as it did with me. But in my case, I was left with several other similar problems. For example, I still have issues with he and she and him and her and always and only. I know the difference between them; I know which one is correct; but I have to say them both out loud and then pick the right one by ear. I also still have to make the rounds with saying would/should/was/were. Sometimes I have cycle around again until I settle on the right one. 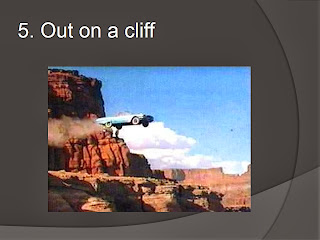 My aphasia has gotten a lot better over these 6 years but it still sometimes rears its ugly head. It’s as if I am driving down a highway, the words are flowing by, and then BAM, I screech to a halt, looking out into a hazy distance over an edge, not being able to go forward, to complete a thought that’s still so clear in my mind. Often this happens when I try to say something but my aphasia blocks the words that begin it. This makes me front-load the start of a sentence with phrases that come easily to me (like “I think” or “I understand”) until the real beginning comes to me to get me started again down the word highway.

6. Too small to be noticed. 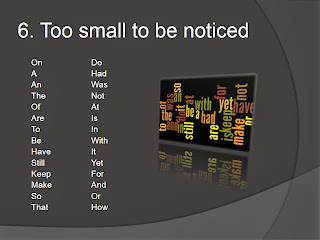 When there’s very little content in a word, people with my kind of aphasia have a hard time paying attention to it, especially when the words are small. I found that I was omitting these so-called “function” words in writing emails. Helping verbs were especially hard for me to notice, so I often left them out. 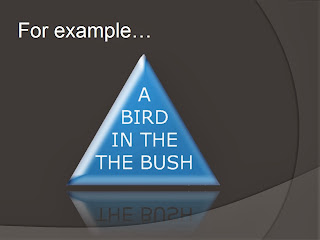 if you read this as “A bird in the bush,” you have skipped over a function word too – the second THE. It really says “A bird in the the bush.” Many people have trouble seeing the second THE – even when it’s pointed out to them. This illusion hasn't really anything to do with aphasia, but it gives you some idea of what it’s like to not see (and therefore to not say) small words. These small words are important to good communication because they make up the grammar in our speech and fill out our thoughts, but they are too small to be noticed for a person with aphasia, either in writing (as in my case), or speaking (as in telegraphic speech), or even in understanding. 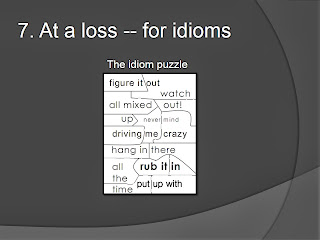 All of a sudden, I was at a loss with coming up with the expressions “all of a sudden” or “at a loss” or “come up with” or any of the hundreds of idioms that I once used so freely. I think I couldn't wrap my mind around them because the words of these common sayings are basically irrelevant to their overall meaning, making them hard to pay attention to. My therapists counseled me to use a different word or phrase when I drew a blank. I couldn't really explain to them at the time that saying it plainly was tantamount to not saying it at all, that my aphasia took away the way of speaking that I so loved.

These 7 things – and much more – make up the world of a person with aphasia. 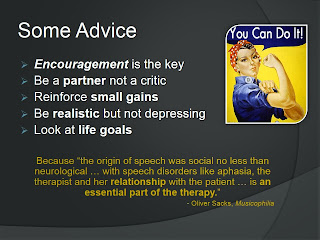 Over time, the worst parts of my aphasia have largely gone away. Some people are not so lucky. But all people with aphasia – no matter how severe – have to constantly strive to make themselves heard, to communicate, and to reach out to other people. And you can do your part by being there to listen to us.

I've dealt with lots of speech therapists in the years since I had my stroke. Although I have great respect for them all, some were better than others, at least, for me.
Dealing with aphasia can be a slow and arduous process, so the progress made is often made at home – without a therapist. For this reason, you have to be careful when setting up expectations – both yours and theirs. After all, you are not always going to be there at their side to help them. But when you are with them, remember as Oliver Sacks once said, the essential part of a person’s therapy is your relationship with them.