At least one-fourth of all stroke survivors experience language impairments, involving the ability to speak, write, and understanding spoken and written language. Over 1 million people in the US are stroke suvivors with aphasia.

For some people, speaking is not affected or comes back soon after. But in my case, I had at least three kinds at speech problems:

For articles about these three conditions, see

About one million people in the United States currently have some type of aphasia.


There are many types of aphasia, classified into fluent and non-fluent. (If you don't have aphasia but want to get an idea of what's it all about, you can go through some aphasia simulations.) 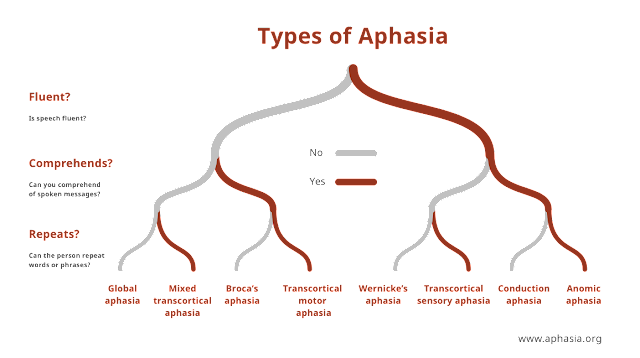 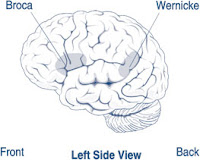 An overview of Wernicke's aphasia:


A video of a man with Wernicke’s aphasia:

A brief overview of Broca's aphasia:


Apraxia is different than aphasia.
Aphasia is a language disorder but apraxia is a speech disorder.

It's rare to see apraxia without aphasia, so how can you tell the difference. Often you can't -- especially if there's little to no speech output.
The person must have a fair bit of speech to see the hallmark signs of apraxia:
I sometimes give a talk about my apraxia and a video of me practicing it.

Here is a short video about the differences between aphasia and apraxia:


Communicating with People with Aphasia

A stroke support group in Virginia wanted to help people better understand and communicate with stroke survivors with aphasia. To help family, loved ones, strangers and healthcare professionals better communicate with people with aphasia they produced an 18-minute video called Patience, Listening and Communicating With Aphasia Patients.

This 'aphasia etiquette' video provides an illustrated guide highlighting the challenges facing people with aphasia and uses the concept of Ask, Wait, Listen for patients. This concept has been developed from feedback by stroke survivors with aphasia and uses simple solutions like offering them the opportunity to express "yes", "no" or "I don't understand".

Recovery Aids
These are some helpful books and aids -- in addition to a good speech therapist:


Oliver Sacks talks about aphasia and the power of music therapy in enabling communication for those who are otherwise unable to express themselves through language:

In the months since a bullet to the brain left her in critical condition, Congresswoman Gabby Giffords has relearned how to talk -- a feat partly credited to music therapy.

The Life Participation Approach focuses on real-life goals of people affected by aphasia.
How it Works: First you pick the end goal that ties into life with aphasia, and work backwards. If the goal is to send emails to family members, you might choose to get there by working on writing letters of the alphabet, then writing words, phrases, and sentences. Alternately, you may choose to get to the same goal of sending emails by using a bank of phrases the person can copy and paste into their message. For info on this approach:
Videos
Oliver Sacks discusses how people with aphasia can continue to live successful lives:


Here are three videos of a young woman who had a stroke at 19:

Tips for caregivers dealing with people with aphasia:

And if you are confused about these medical terms beginning with a-, this is a explanation of some of them:

For more info on speech and aphasia, see the page on web links.